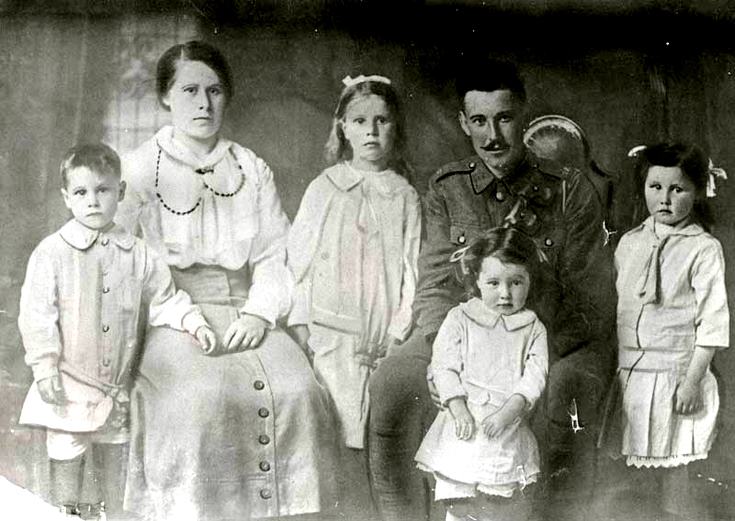 This photograph is of James Third (Royal Field Artillery) born 1891 at Mains of Tarty, Georgina Margaret McIntosh Third (nee Lumsden) and their four children in c1918. Their children are John 1912, Jemima 1910 (McAskill), Jeannie 1911 (Tucker), and Elizabeth 1913 (Tucker). All children were born in Alford and all except Jemima came to New Zealand in 1921. Apparently the farm house they lived in was still standing a number of years ago, but without a roof.


Picture added on 11 March 2010 at 14:18
Comments:
My Father was born Simpson Third in Alford Aberdeen in 1911. Could this possibly be some relatives???
Added by Elaine Third on 11 July 2011
That must be dad's uncle ?????
Added by Trish Fea on 11 July 2011
Elaine was your father born 23/8/1911 at Waterside Tullynessle- his parents William and Catherine Third? If so you are my cousin and James is your uncle
Added by Lawrie Third on 17 October 2011
Yes that is correct exact DOB -his father was William and mother was Catherine, so where do you live cousin. I know there was another family too as his father William married the sister when his wife died., and his half brother was called Lesley one of them anyway-he also had brothers called Peter-Teddy- sisters Annabelle- Lizzie ones I can remember offhand, does that relate to you?
Added by Trish Fea (Simpson Third eldest daughter) on 17 October 2011
Hi Trish, yes it all ties up to the same family. Its a complete coicidence as I was in the Royal Scots Museum in Edinburgh checking on the Service record of Simpson 2 weeks ago.I have a family tree for the Thirds from the 1700s.
Added by Lawrie Third on 19 October 2011
Hi Lawrie
I was in Alford in May of this year trying to find any Third's looked through the graveyard also nothing.Dad (Simpson)was bar manager at the Scotland Hotel in Pitlochray, meet mum and had me in Aberfeldy hospital 1949 we lived in and around Pitlochray-would love to see the info you have collected on the family-also what clan we come under someone told me it relates back to the mother maiden name.dad was also a prisoner of war in a japanese camp for 5yrs I believe.
Thanks lawrie

Added by Trish Fea (Simpson Third eldest daughter) on 19 October 2011
Hi Trish,
there is too much information to put it on here. My e'mail is- l.third@btinternet.com I live about 22 miles from Pitlochry.The Thirds belong to the Gordon Clan.I believe your father was in the Gordon Highlanders and transferred to the Royal Scots and was taken prisioner at Hong Kong.Waiting your reply.
Lawrie.
Added by Lawrie Third on 21 October 2011
Hi Lawrie
I wish we had known of you living there it would have been great to catch up. My email is trishfea5@gmail.com. We live in Napier New Zealand
and getting excited for the finals of the rugby world cup-looking forward to you sending some info about the THirds
Thank-you
Trish
Added by Trish Fea (Simpson Third eldest daughter) on 21 October 2011