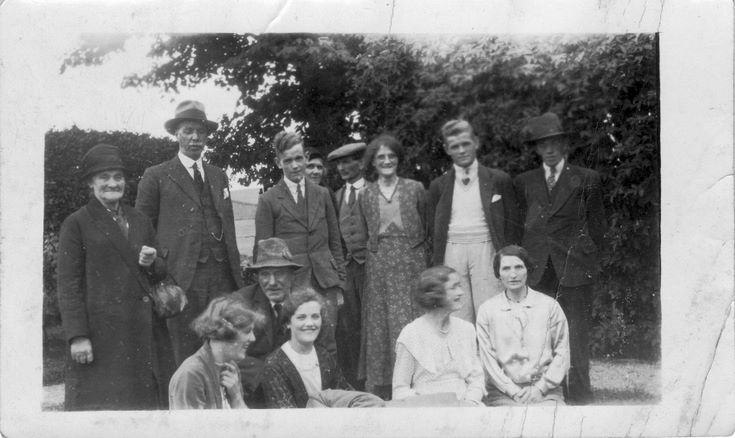 This photograph, taken c 1930, shows three generations of Reid/Nicols, with my grandparents William Reid and Elizabeth Nicol in the centre and with Elizabeth's mother and 5 of their 8 surviving children, taken, I believe, at Shannoch Farm in Breda - as follows:

Left to right back row Isabella Nicol (nee Tough - my great-grandmother), unknown gentleman in hat, John Reid (my uncle), unknown lady's face peeping out from behind John, William Reid (who farmed Shannoch from 1895 until his death in 1960 - my grandfather), Elizabeth Reid (Nicol - my grandmother), Ronald Reid (my uncle), James Reid (my uncle), front row Isabella Reid (known in the family as Bunty and my aunt), Margaret Reid (my mother) the gentleman behind them is also unknown, then two more unknown ladies. If anyone can help with any of the 5 unknown people, I would be very grateful. I was wandering if any of them could be the Gordon family of Alford, as they are also cousins?