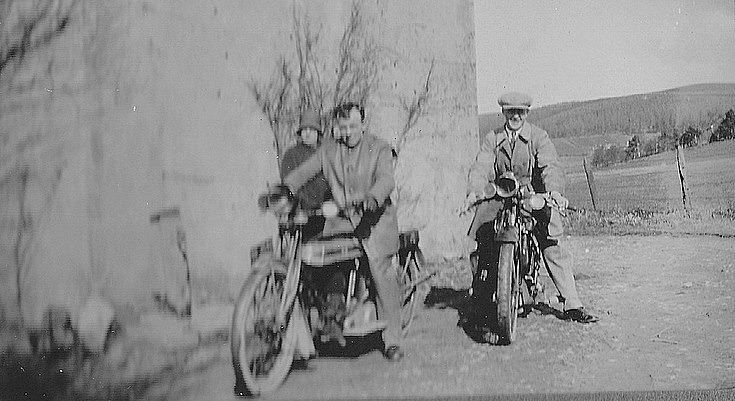 Two rather nice machines parked at the side of Prospect Hill Cottage, with Cairn William in the background. Who are the riders? Could they be James Shearer McHardy on the right (later to emigrate to Canada) and John Paterson (later to marry Edith McHardy)? I think that is Edith standing in the background.
Picture added on 06 December 2008
This picture is in the following groups
Pipe Major Jimmy McHardy
External Links
PM Jimmy McHardy
Comments:
Yes - I believe this a picture of James Shearer McHardy (my grandfather) I have seen this picture growing up but the lady might be his wife Beulah and not his sister.
Added by Pat Weir (nee MacHardy) on 24 April 2009
Many thanks Pat. Ken kindly let me scan a whole lot of McHardy photographs which I have not managed to get around to uploading as yet. Your assistance with identifications would be invaluable with those too.
Added by Jim on 24 April 2009