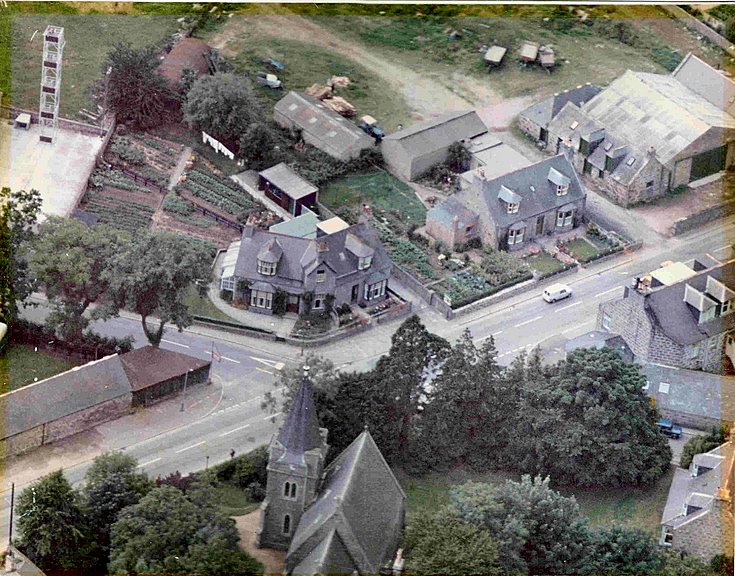 Ray says: "I was given the attached photo by the late Mr Forbes (not Bill), who was a retired policeman and lived in the left-hand part of the house at the corner of Bank Brae and Donside Road, Alford. We moved into the house next door in March 1985. The photo looks to have been taken before 1984 by the line of the walls in front of No.3 Donside Road (the house to the then farm), and from the condition of some of the buildings, maybe 10 or more years earlier. The farm outbuildings on the right (cowshed and stable with chaumer) were partially demolished to make way for Balfour Road and the remainder incorporated into Rosie's Store. The Fire Station tower can be seen in the top left corner. Mr Forbes was very tall but obviously he did not take this photo."
Picture added on 25 December 2008
Comments:
Bridge Street? I've lived in Alford for 50 years and never heard of a Bridge Street.
Added by Mr Noname on 26 December 2008
That should have been Bridge Road, now corrected (PS anonymous comments are not normally published), and if you haven't heard of Bridge Road, look at photograph 62 dating back to the early 1900s.
Added by Jim on 26 December 2008
Photograph 62 is wrongly captioned on the original. They made mistakes in the 1900s. Go into the Local Studies Department at the Aberdeen Central Library and ask for the 1899 map of Alford. You'll see it's marked Main Street. After all, why would it be called Bridge Street/Road when there isn't a bridge?
Added by Mr Noname on 05 January 2009
Yes, I had thought about this name and thought it possible in relation to being a "bridging" street between Main Street and Donside Road. However, I accept the conclusions of your research (whoever you are...please see the comment about the publication of comments without a name, after all, it is only a matter of politeness)(and I don't have the time or energy to trail into Aberdeen Central Library!) and am therefore happy to change the captions duly.
Added by Jim on 05 January 2009
I heard it was called Bridge Road because it led to Bridge of Alford.
Added by Richie Duncan on 26 January 2009