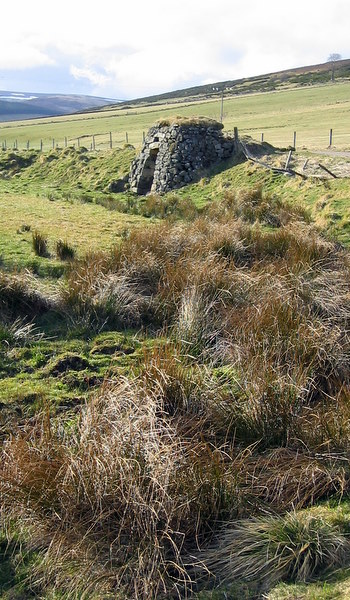 There are fairly large numbers of these lime kilns, in various stages of preservation or decay, in and around Glenbuchat. They were used to produce burned lime for agricultural and building use from limestone. Limestone from nearby quarryings was layered alternately with peat inside the "pot" of the kiln, and a fire started inside the draw hole, which can clearly be seen on the left hand side in this photograph. The limestone and peat was loaded into the "pot" through the open top, and once full, the kiln was sealed over with slabs of turf until the burning was complete. About four to five cart loads of peat were added to the kiln along with one cart load of limestone. The remains of the loading ramp can also be seen at the rear of the kiln in the right of this photograph. The calcium carbonate of the limestone was converted to calcium oxide during the process, with carbon dioxide being driven off. Once produced, subsequent handling of the burned lime would have been a tricky process due to the risk of burns to exposed skin, eyes, nose and throat, and at all costs the burned lime would have needed to have been kept dry until needed (tremendous heat can be produced very violently in the slaking of burned lime by the addition of water).

A good source of further information is "Limekilns of Upper Donside, a Forgotten Heritage" by Cruickshank, Nisbet and Greig, ISBN 1-903714-09-5 Aberdeenshire Council 2004.
Picture added on 22 March 2009