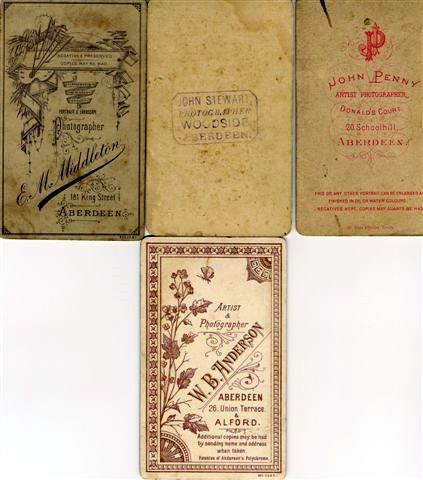 No: 1042  Contributor: Ron and Berice Lawson   Year: 1900
A selection of Photograph Backpieces

Photographers who had taken some of Ron Lawson's family photographs, including here: E.M.Middleton, 181 King Street, Aberdeen; John Stewart, Woodside, Aberdeen; John Penny, Donald's Court, 20 Schoolhill, Aberdeen, and W.B.Anderson, 26 Union Terrace, Aberdeen and also Alford.
Picture added on 16 April 2009
This picture is in the following groups
Australian Emigrees and their Relatives from the Alford Area
Comments:
I have a photo of my grandfather Richard Widger taken at 181 King St from E.M.Middleton Art Studio in 1900/1. He is in full Scottish dress. He was living in Dundee. Aberdeen is a long way to travel. Was there a studio in Dundee?
Added by Shirley Munday on 02 August 2011