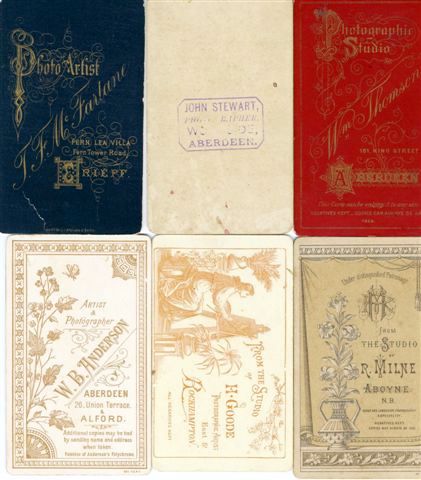 More of the backpieces associated with some of the family photographs passed down to Ron Lawson.
Photographers shown include:
T.F.McFarlane, Fern Lea Villa, Fern Tower Road, Crieff; R.Milne, Aboyne; H. Goode, Rockhampton, Australia; Wm Thomson, King Street, Aberdeen; John Stewart, Aberdeen, and W.B.Anderson, Aberdeen and Alford.
Picture added on 16 April 2009
This picture is in the following groups
Australian Emigrees and their Relatives from the Alford Area
Comments:
I have an old photograph by R Milne of Aboyne, can you help me to date it?
Added by Richard on 04 August 2009
I will give it a go Richard, and if I can't, I know someone who specialises in dating old photographs. Could you send a copy to the website email address as shown on the introductory page please?
Added by Jim on 04 August 2009